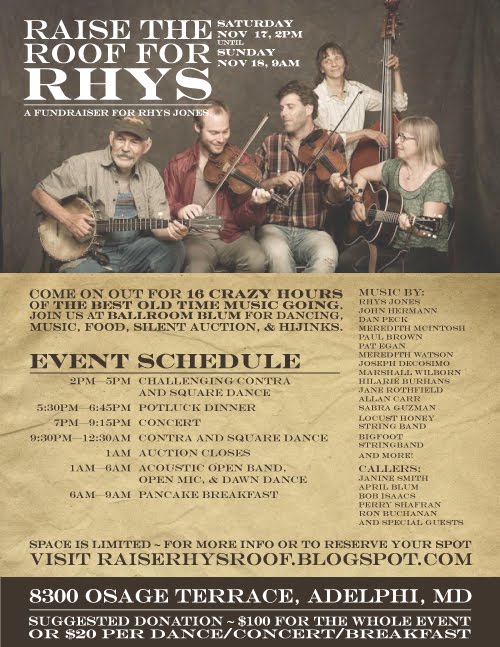 Just added!  At the potluck time (5:00 pm) we are having a Callers workshop space, grab your plate and come and hear the wisdom of Ron Buchanan and Bob Isaacs.  Sign up for that and all workshops available at the front door!
Posted by Penelope at 8:04 AM No comments:

Numbers on the move

At last, I come home to an inbox resplendent with reservations and paypal notifications!  Finally, people are beginning to let me know how many are coming, just an email will suffice, you can certainly donate at the door.  Tomorrow, Rhys or I will post the workshop schedule, but suffice it to say (in Rhys' words)  "You have more stellar performers and callers here than in three typical music festival weeks combined. The concert alone should be freaking amazing."
Posted by Penelope at 8:15 PM No comments:

Have you ever wanted to take a Master Fiddle- old time, Irish, Round Peak , Master Banjo, Bass, Voice Class?  How about all of the above?  It seems a shame to get all the best Old Time musicians together under one roof and not have workshops.  So we're not doing that! (That is to say, we're not, not doing that - or, oh heck, WE'RE DOING WORKSHOPS!!!)

This time I really need your feedback, either email me at raiserhysroof@hotmail.com to let me know what workshops you want, or post it in the comments.  Later we'll put a schedule together!
Posted by Penelope at 12:45 PM 1 comment:

and The Bucking Mules

yes, you read right, in addition to Big Foot, Locust Honey, Jane's Gang with Hilarie Burhans I just heard the Clifftop 2012 Traditional Band Champions the Bucking Mules are going to be at Raise Rhys' Roof!

Get your tickets now through paypal, or at least shoot me an email if you're thinking of coming, so I know how much pancake batter to make...
Posted by Penelope at 7:52 PM No comments:

the ever growing canon of musicians, not just in the posts, but being added to the flier which is the picture there...  Yes, I just put a new version up, since I learned that Sabra Guzman will be there too!!

If you follow the blog, you'll be the first to know!

So, a little more on the day, there will be, along with a mind boggling array of music and dancing and music, a silent auction featuring all manner of fantastic things!

Speaking of workshops, I heard a rumor that there were going to be some workshops available on the day, on site, so...

Also - this event *may* be partially sponsored by an excellent microbrewery in Pittsburgh, just sayin'
Posted by Penelope at 12:42 PM No comments:

I don't know where we're going to fit every one, but after scoping out Ballroom Blum - conveniently attached to the large, lovely and comfortable home of the Blums - we figured out we can have two live jams in the (two separate!) rec rooms and one upstairs in the living room SIMULTANEOUS with dancing in the ballroom!

So, you do not want to miss what is shaping up to be the single most amazing old time pajama party ever!  Get a ticket today! See the panel over there on the right for info.
Posted by Penelope at 6:09 AM No comments:

Hi There,
a bunch of you have asked both about donating and what there will be to bid on. To donate items, please contact me by email at raiserhysroof@hotmail.com
What's donated so far?
Body Work
Handmade Mugs
Stoneware Bowl
Custom Dance Clothes
Complete Bike Tune UpBaked Goods A Dance Commission (written for you!)Fiddle Master classFiddle LessonsRecorded Music by your favorite Old Time MusiciansDVDs of amazing performances

Buy a spot at the event

Hi!
By clicking the handy Donate button below, you can send in increments of $20 up to $100 (or sure, more if you like!) to reserve your spot at this fabulous event!
If you are a picking a few events, like Challenging dance and Pancackes, or Concert and Dawn Dance, please send a note to raiserhysroof@hotmail.com as to what you're attending,
Suggested $20 each (more if you can) for:
Challenging Dance 2 pm - 5 pm
Concert 7 pm - 9:15 pm
Evening Dance 9:30 pm to 12:30 am
Dawn Dance 1 am to 6 am
Pancakes! 6 am - 9 am
Sorry, I know it's cumbersome, but space is very limited